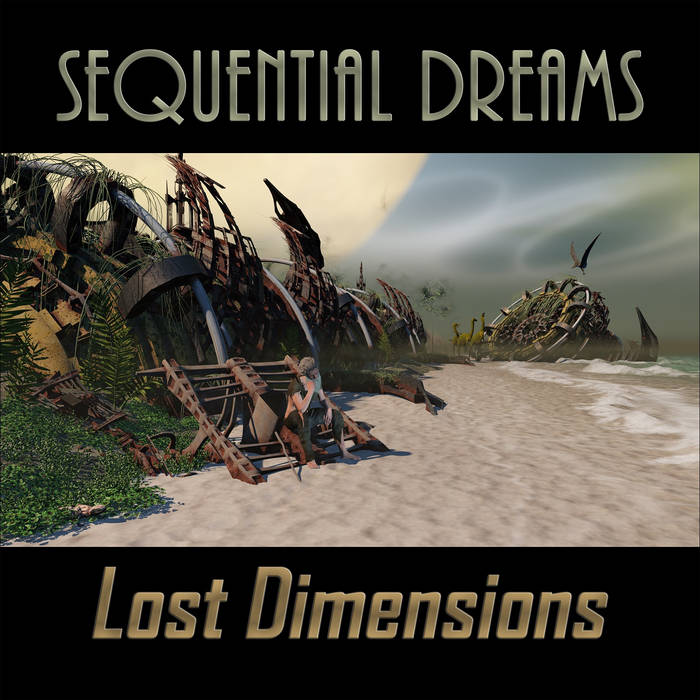 << Simply exhilarating with sequences cut in a glass factory and of which the harmonious fragility resists to the strikings of percussions. Here we dive into the Stratosfear universe (by moments we are there) with riffs of acoustic guitar and these atmospheres (...) Everything is in the tone! The rhythm takes the shape of the sequences and percussions storms from Franke while the guitar and the keyboard layers inhale the reveries of Froese and the romanticism of Schmoelling>> excerpt from the review of the latest Sequential Dreams album ( synthsequences.blogspot.ca/2015/12/sequential-dreams-lost-dimensions-2015.html ).

<< Been on almost constant loop since getting it. I absolutely love the homages to TD that are scattered throughout the album. Magnificent! >> Album listener, Dec 19


Released in early 2016, “Lost Dimensions” is Sequential Dreams’ sixth album. The album is inspired by the sci-fi concept of a time traveller that escapes imminent danger to Earth by travelling one thousand years into the future.
Most tracks evolve through many stages ranging spacy intros and breaks, progressive synthesizer driven sequences overlaid with multiple layers of evolving melodies and themes making for rich textured soundscapes.
“Lost Dimensions” is a collaborative album with teamwork including contributing artists from Canada, Finland, Ireland, and the USA and is a truly international production. Earth contributing artist has released many solo or other collaborative albums under other projects and bring their experience and passion to this album.

Music from Sequential Dreams and its contributing artists is played regularly on both FM and Web radios worldwide. You are invited to visit bordersedge.com for news, or on facebook at www.facebook.com/SequentialDreams

Across Dimensions
As the time traveler's capsule crosses the quantum threshold, a kaleidoscope of dimensions appear. Any change in phase and the capsule could emerge in an unknown dimension.
(Composed and Performed by Altocirrus and Kuutana)

One Thousand Years
Maintaining quantum phase integrity, the time capsule emerges a thousand years into the future.
(Composed and Performed by Johan Tronestam and Kuutana)

Arrival Point
Earth, a thousand years into the future. Many years after the projected meteor collision that would have decimated most life shortly after embarking on the journey.
(Composed and Performed by Synthesist (Chris Pearre) and Kuutana)

Distant Signals
Having set up shelter in the remains of the time capsule and after adapting to the strange new wildlife and surroundings of this new Earth, the traveler starts capturing signals which seem to be emanating from Mars
(Composed and Performed by David Bruce Davis and Kuutana)

Brave New World
Communications with an colony settled on Mars led to a local team of Martian archeologists preparing to visit the traveler.
(Composed and Performed by Kuutana)

Descendants
Evolution was taken into hand by early Martian colonies. With resources thinning out, the Earthers needed to adapt their physiology to their new home planet. The traveler was amazed to see how much change took place over the course of a millennia. Was he now the sole human being in the Galaxy?
(Composed and Performed by Kuutana)

Site Links for the Composers

The album cover art is titled “Robinson Crusoe 3015” - original digital art by Andreas Schwietzke and used with permission for this album.
www.facebook.com/andreas.schwietzke

Sequential Dreams would like to highlight the important contributions to the Berlin School genre of music made by the late Tangerine Dream co-founder, Edgar Froese. Though you are no longer with us in flesh, your soul continues on in your musical legacy.