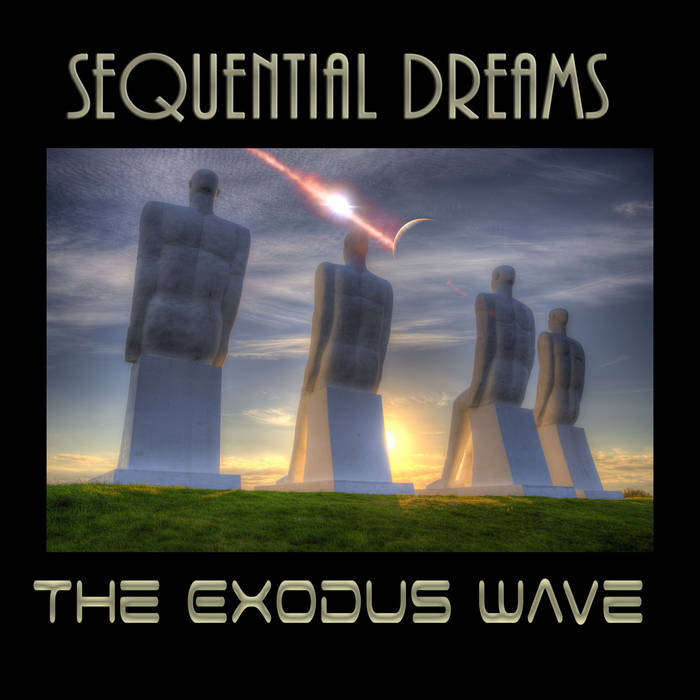 The Exodus Wave album is the Sequential Dreams project’s eighth album release. Running at 79 minutes and 14 tracks, this Berlin-School of electronic music inspired instrumental cinematic electronic progressive rock album should appeal to lovers of classic electronic synthesizer sequences, rich ambio-tronic effects, layered melodic and harmonic pads and leads. Add rich guitar riffs and rhythms of former Tangerine Dream guitarist Bernhard Beibl and you’re set for a revival of some of the moods that defined an era and still inspire today.

The album also features guests artists Chris Pearre (a.k.a.: Synthesist - California) and Arend Westra (Eagle Synth - Holland) for an international cast. The Exodus Wave theme was conceived by Sequential Dreams and Borders Edge Records founder Ron Charron (a.k.a.: Kuutana - from Canada) who produced and mastered the album as well as composed and performed keys, synthesizers on all tracks and also additional guitars.

The album follows a science-fiction theme with the tragic unfolding of events following the detection of an incursion of another universe onto our own, generating an energy wavefront forcing the evacuation of Terra. All is not lost however, as the Arcbuilders build a means to evacuate to Terra Nova, a new planet by way of a new Quantum engine. Perhaps this little story line will help you build your own movie of the mind as you listen through the album. The storyline also drove the creative process of the musicians as they composed album tracks leading to this harmonically rich album.

CHRIS PEARRE (a.k.a.: Synthesists - Composed and Performed keys and synthesizers on Pleiadian Prophecy).

RON CHARRON (a.k.a.: Kuutana) - Canada based, composed and performed, keys and synthesizers on all tracks. Additional guitars on Telemetry and Pleiadian Prophecy. Guitars on other tracks except Subspace Breach and Booster Separation. Arrangements, Mixing, Mastering, and Production on all tracks. Album producer and concept.
Solo tracks: Interstellar, Wavefront, the Archbuilders, Countdown to Launch, Quantum Theory, The Exodus Wave, Mission Objectives, Arcflight, Hibernation in a Virtual World, and Approaching Terra Nova.

A honorable mention to the giants who have provided musical inspiration throughout the years, Paul Haslinger, Peter Baumann, Chris Franke, Klaus Schulze and last but not least, Edgar and Jerome Froese and the many amazingly talented musicians of Tangerine Dream in its many formations.