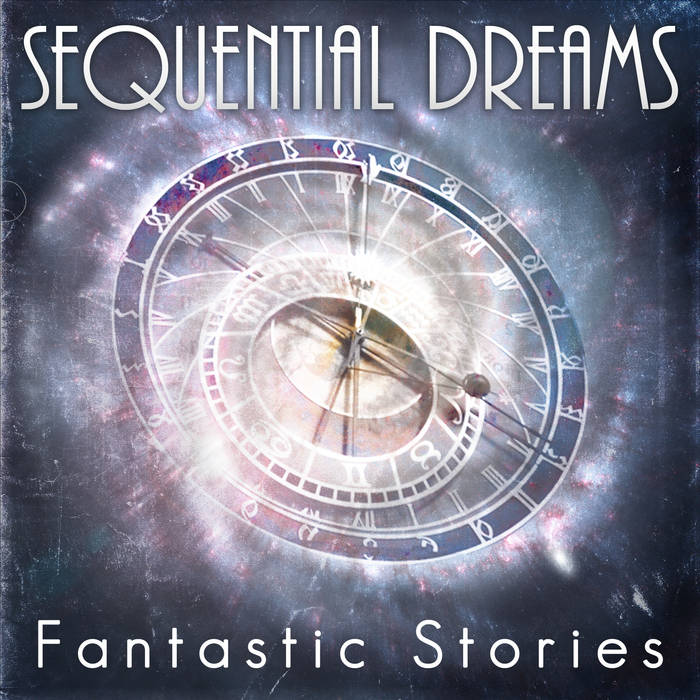 rdjwilson Varied with some great ideas, some work better than others for me, but still a good album. Favorite track: The Tannhauser Gate.

***¾ (Creative, progressive e-rock)
Last July, the artist from Montreal (Canada) invited his followers to the multimedia launch of his 2nd album “Fantastic Stories”; an album including 14 tracks inspired by novels, TV series and movies which had an impact in the life of Sequential Dreams, the nom de plume of Kuutana Serenity.
From the first chords of "Orbital Burn", we feel this very filmic influence which stimulates the ideals of Sequential Dreams. The chords which open the intro sound as an acoustic guitar which champs at the bit in a galactic desert. The percussions fall and hammer a slow rhythm while quietly rhythm and harmony go astray in the spheres of Tangerine Dream warmed to white by Jerome Froese's insolence. Heavy chords make tremble a structure altogether very harmonious which takes an unbridled tangent at the end of route, blowing into 220 volts, saxophone in more. The slow and heavy rhythms, encircled by twinkling string of sequences, are the privilege of this album which is strongly inspired by Tangerine Dream, post- Franke era, and Jean Michel Jarre in his Chronology mood. And it's in this optics that "Solstice on Terra Prime" tries its onset with slow chords, gurgling of heaviness, which is fast harpooned by a line sequences with keys sparkling in the shadow of some heavy riffs of a slouching guitar. One would say The Cure lost in the electronic phases of TD. The rhythm is split by approaches of refrains style where it lets itself tame by spherical movements of sequences. It's heavy, powerful but especially very musical. The touches of saxophone add a more New Age dimension to a structure which is as well heavy as dark. Kuutana Serenity polishes up admirably its titles by dosing his rhythms of soft nuances and by decorating his ambiences of beautiful melodious fragments, giving thus rich structures which attract irreparably the hearing. This is good electronic rock, by moment intelligent synth-pop, where no second is lost, wasted in a lack of imagination.
With 14 tracks there are some of them which turn around the same themes. If titles like "Approaching Galactic Core", "The Transwarp Incident", "The Tannhauser Gate", the blazing "The Hex Eye of Saturn" and "The Cloud Minders" are drinking in the same trough as the first two tracks "The Caves of Steel" seduced with its heavy circular rhythm fed by furious keys which intertwine in a bilateral sonic ballet, twirling in a black ambience packed by an avalanche of sequences with random rhythmic patterns. Heavy, furious and very good. "I Can Remember the Rain" is a wonderful electronic ballad with a slow rhythm where the harmonies sparkle in the trails of apocalyptic synth waves à la Vangelis (Blade Runner). A track which is going to haunt your ears very well much farther after hearing it, quite as the voices of cosmic mermaids which radiate in the very beautiful and morphic "Shore Leave on Risa"."Temporal Shift" waltzes out of time on its slow rhythm shaken by sequences of which the jerky debit contradicts the weight of the bass pulsations and heavy percussions. The synths are very TD and entail us in a Mars Polaris approach, quite as the very good "The Singing Bells of Mars" (a coincidence?) and "To Seek out New Life". And the more I move forward in “Fantastic Stories” and the more I like what I hear. The album is rich in rhythms of which the perpetual rhythmic variations enchant as much than the lunar melodies which sparkle like stars in a black cosmos. It's surprising route electronic of rhythms and melodies which soaks into some intense film aromas with rhythms finely jerked and stroboscopic where the percussions and guitars add a touch of strange futuristic rock as in the boiling title-track.
Done well and well mixed for a homemade album, “Fantastic Stories” is a delicious find which deviates from the usual of EM by eyeing more towards good electronic rock, tinted by a light accent of synth-pop, without denying at all the roots of the cosmic and futuristic New Berlin School. Creative and very musical, Kuutana Serenity, or Sequential Dreams, does not hesitate to unfold the path of his influences which complement each others marvellously in a sound pattern which sometimes bites into the dusts of Blade Runner. It's like a blend of Robert Schroeder, Tangerine Dream and Jean Michel Jarre beating hell over very Vangelis synth pads. I quite enjoyed it. It's very good and of a surprising musical freshness. Available on the Sequential Dreams Bandcamp site as well as on CD Baby, iTunes and Amazon.
Sylvain Lupari (July 24th, 2013)
"

"Orbital Burn"
In 2003, Author K.A. Bedford's novel "Orbital Burn" was published. This is the story of a detective in trouble, about to get evacuated from her homeworld.

"Solstice on Terra Prime"
Not to be confused with an episode of that name in Gene Roddenberry's work, this track is inspired more with the 1990's series "Sliders", where through the use of a portal, a group of people travel between alternate versions of Earth. Terra Prime relates to the point of origin, the starting point of this inter-dimensional travel.

"Approaching Galactic Core"
This track pictures the end point of a long galactic voyage from our "outer banks of the Milky Way galaxy, home of Earth" to the center of the galaxy, where matter is packed tight around the galactic core. The light of all those packed stars lead to extremely bright space. The dense packing of matter also create unexpected gravitational effects which warp space and time.

"The Transwarp Incident"
In Gene Roddenberry's acclaimed science fiction series, a recurring advanced form of traveling through space comes in the form of Transwarp. In Transwarp the conventional limitations of Warp travel are transcended. In one episode of TNG, "The Traveller" leads to travel beyond the normal confines of time and space: Where mind and matter become one. Beware of what you think, because it will become real and materialize before your very eyes!

"The Caves of Steel"
Author Isaac Asimov's 1954 novel "Caves of Steel" was an inspiration to this track. Asimov depicts humanity developing its cities mostly underground, linked into vast networks. It is the starting point for many of his ideas developed in later time novels.

"I Can Remember the Rain"
In the epic movie V for Vendetta, there is a sequence where there is the recalling of the story of a woman imprisoned because of her lifestyle preferences, writing her life diary on scraps of paper before her imminent death at the hands of her captors. In her accounts of her past life, she quotes "I know I can remember the rain..." now a distant memory, after having spent so much time in captivity. It is a poignant moment in the film. The listener may find that the tonal qualities of some of the sounds, including the percussive elements
are reminiscent of a downpour of rain.

"Temporal Shift"
In the folklore of BBC's Doctor Who, An emergency temporal shift was a form of transport that was used to move beings through time. It was used only as an emergency measure due to high risk.

"The Tannhauser Gate"
In a very well acclaimed science-fiction movie directed by Ridley Scott (Blade Runner) scored by Vangelis, in his final moments a Replicant, in the final moments recollects the highlights of his life, one of which "I watched c-beams glitter in the dark near the Tannhauser Gate. All those... moments... will be lost in time, like tears in the rain. Time to die".

"The Signing Bells of Mars"
"The Singing Bell" is a science fiction mystery short story by Isaac Asimov that first appeared in the January 1955 issue of The Magazine of Fantasy and Science Fiction. In Asimov's story, striking these special lunar rocks created incredibly beautiful sounds. This track moves this concept to Mars!

"The Hex Eye of Saturn"
The Voyager probe first caught a glimpse of this, an now recently Cassini. A huge, hexagonal shaped storm at the north pole of Saturn, two times the size of our own planet! This track is intended as a soundtrack to this strange and imagination inspiring phenomenon.

"To Seek Out New Life"
The intro to Gene Roddenberry's most famous series... "A Five Year Mission... To Seek Out New Life... To Boldly Go.." Notice a few signature sounds. Can you hear a version of the transporter at points in the track?

"Shore Leave on Risa"
Epsilon Ceti B II, located 88.2 light-ears from Earth, is known for its beauty and relaxing tropical atmosphere. On another Gene Roddenberry imagined planet, Risa, the vacation planet awaits the space weary federation crew for a bit of Rest & Relaxation.

"The Cloud Minders"
Science Fiction stories about the wealthy living in distinct citadels, isolated from the poor, have been a long staple of the genre. Going all the way back to the turn of the 20th century with Fritz Lang's Metropolis, then forward to Isaac Asimov's Spacers who live initially in orbit around the Earth then onto other planets, and more recently Elysium which embodies this idea. The Cloud Minders was the title in the Gene Roddenberry's original Star Trek series where the city dwellers live in a city in the clouds, and far below them the troglodytes mine the resources for the benefit of their wealthy task masters.

"Fantastic Stories"
This is the album wrap-up track. It is composed in the style of the closing soundtrack to an imaginary science-fiction film (or collection of short stories, as you will have listened to, throughout the album!)

Bonus Track (for Album purchasers only)
"The Teachings of Kukai"
"Kūkai (空海), also known posthumously as Kōbō-Daishi (弘法大師 The Grand Master Who Propagated the Buddhist Teaching), 774–835, was a Japanese monk, civil servant, scholar, poet, and artist, founder of the Shingon or "True Word" school of Buddhism.
Kūkai is famous as a calligrapher and engineer. Among the many achievements attributed to him is the invention of the kana, the syllabary with which, in combination with Chinese characters (kanji), the Japanese language is written to this day. Also according to tradition, the Iroha, which uses every phonetic kana syllable just once and is one of the most famous poems in Japanese, is attributed to him but again, this is popular belief and nowhere attested to. His religious writings, some fifty works, expound the tantric Buddhist Shingon doctrine". Excerpt from en.wikipedia.org/wiki/Kukai