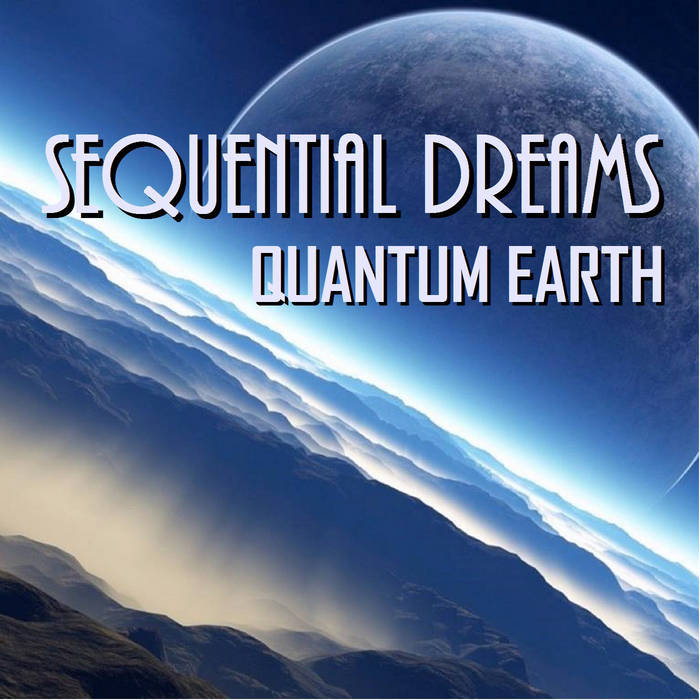 Ron at Borders Edge Music An energetic mix of Berlin School EM, with some tracks a fusion of Chill/Trance.

"Once upon a time, 10,000 light years away and ten thousand years into the future will live the descendants of a small blue planet remembered as Terra, the homeworld. As they discover the Universe Builder's machine planet and Quantum Drive, they set on reconstructing and revisiting their homeworld, its solar system and its history."

Born out of this evolving short story and music by Kuutana, and with the musical talents of Austria's Celestial View, Finland's Johan Tronestam, California's Chris Pearre (a.k.a. "Synthesist"), and Canada's "The Roboter", Borders Edge Records introduces this Sci-fi and Berlin School EM landscape with the introduction of Sequential Dreams' fourth album titled "Quantum Earth".

Something our species may get to do someday, according to thinkers as diverse as Neil deGrasse Tyson and David Brin, is to build universes. Sometimes I fancy that my favorite movies and shows are tucked away in several reconstructed black holes in our cosmos or in one of the multiverses hinted at by the latest observations of the Planck mission. Kuutana, Celestial View, Johan Tronestam, Chris Pearre (known as Synthesist), and Canada’s “The Roboter” have collaborated on a similar project of cosmic interior decoration, except that it is long lost Earth and its system of planets that their characters, the children of legendary Terra, restored.

The title track “Quantum Earth” is a busy number laced with cometary whooshes in an arena of cosmic vistas, followed by a muscular technetronic evocation of the future we do not expect to see. This sounds like the preparation for a journey, although it is not the point of origin that our remote posterity will visit, but the loving reconstruction of it via the technology they avail themselves of on the Universe Builder’s planet. Or perhaps this is a score for the journey to that planet. There’s a sense of promise and adventure whichever the case.

In “The Universe Builders” Celestial View and The Roboter do a great job soundscaping the universe-building process and making it easy to visualize. Imagine a huge workshop in hyperspace with busy crews. Very enjoyable.
“Destination Terra” seems to start at 15 kilo-gees, gliding actually. Lots of good SF effects, and a gladdening, triumphal instrumental swell that must mean arrival. Very good use of large chords, Johan and Kuutana! (But I’m biased.)

“Solar Sails” beggars description. There are parts of this track that are utterly beautiful; truthfully most of it is. Synthesist & Kuutana conjure up the majestic but fragile beauty of the real thing as the sunjammer sails on light and particle-flux. Wait til 2:27 to be enthralled, an experience that is repeated over and over again. I wish it were twice as long.

“Celestial Bodies” must augur a grand tour of the solar system. Exotic worlds, yes, and the music to go with it. Yet I think I hear a truly outworld quality in this track by Celestial View & Kuutana. I’m minded of merchants who deal in the foodstuffs of hitherto undiscovered planets, delicacies of the starborn which 21st-century taste buds have not experienced, the excitement of markets teeming with spices and artistries of a star cluster’s worth of worlds. This raises the question: What viands are available aboard this sunjammer? The visitors to Solar System 2.0 may be discussing the merits and finer points of the menu.

The Uranian moon named – like all of them – from Shakespeare’s plays is the locale for “The Ice Canyons of Miranda.” Cold crystalline canyons whose cliffs tower imperiously into a sky of dense black with stars sprinkled through it, not twinkling but hard and bright. The icy, faerie beauty is well wrought here. Then there is a speed-up past the walls of ice until they blur. This really feels like a tour in a chartered space-speedster, its propulsor-unit oscillations bringing forth faint resonances of Tangerine Dream.

“Fireflies in the Starlight” is as ethereal as the title sounds. Tinkerbell without the Disney frivolity. An auditory delight.

“Infinite Improbabilities” – Real scientists love Hitchhiker’s Guide more than they do Star Wars because it’s pitched to them. They love the humor at any rate. The infinite improbability drive – if I correctly take it to be the inspiration for this track – has a more serious intent here. Echoes of “Drive” (Tomorrow’s World, but I’m guessing) in a few phrases are followed by a rapid percussive beat which could provide a high push to the business end of a space ship: or, in this case, the Quantum Drive of the Universe Builders. Our remote descendants must be getting ready to push onward to the farthest, most outlying probability strata.
I can’t get enough of this. Cinematic Grade A.

Sound waves take the shape of air-raid sirens. The roarings are quieting down in a kind of din from where raises a heavy jerky structure of rhythm. With a plethora of bass sequences and pulsations, electronic and guitar riffs, as well as a lot of percussions with skins of Bongo drums which are thundering a lively rhythm of which the futuristic tribal approaches have quite the appearances of a solid cosmic e-rock a la Jarre, the title-track of “Quantum Earth” sets the tone to another solid album of electronic rock with a futuristic dimension from this collective project (Celestial View, The Roboter, Johan Tronestam, Kuutana and Synthesist) that is Sequential Dreams.

Without surprises, the international quintet offers an album where the rhythms are sometimes raging in moods from time to time sieved by moderations and where the harmonies always hang on to the hairs of our ears. Hard-hitting, with short passages a bit more moderated, "Quantum Earth" forces our eardrums with a heavy and lively electronic approach which is lying on a meshing of sequences and percussions to which are added beautiful ethereal synth pads, filled of sweet artificial voices, which counterbalance the ferocity of the rhythm. For the fans of Sequential Dreams, we are on familiar ground. And I would add that this “Quantum Earth” is a little wilder with a technoïd approach which is very near to a loud IDM. The rhythms cross the tribal aromas, in particular because of the bongo drums, in envelopes which mix the mid and the down tempos. But it's heavy. This is strong e-rock very influenced by the periods of electronic rhythms from Jean Michel Jarre and Tangerine Dream. When to those who like an EM tortured by keen percussions and stormy sequences far from the wanderings sequenced of Berlin School, excepted for the very beautiful "Infinite Improbabilities", and closer to a type of psybeat, Sequential Dreams should appears in your notebook of discoveries to come.

"The Universe Builders" also begins with a long whoosh and a lot of short whaash. The intro is fascinating with a double speed sonic dialect which will call back the attempts of communication in Close Encounter. Soon, the rhythm begins to sparkle and gesticulate with deep sequences before falling in a kind of heavy hip-hop with a pace, clubbed by robust percussions and bangings of hands, which skips in a puddle of pulsations, gurgling and electronic winds. Break-dance or hip-hop; "The Universe Builders" skips and pounds with sequences which flicker mockingly and orchestral synth pads which make counterweight to this tempo pounding in a thousand of sound flavors.

Less heavy and closer to synth-pop, "Destination Terra" crackles on a structure of electronic percussions and sequences with an unbridled flow, while the harmonious envelope crosses as much a cosmic, at both ambient and ethereal, as a synth-pop.

Just like "Celestial Bodies" moreover, but which leans more towards a strong IDM. "Solar Sails" is the relaxation moment on “Quantum Earth”. Its intro is seraphic and the rhythm which holds its hand is silky slow and soaked of a dense sound fauna which brings a bit of distortion.

"The Ice Canyons of Miranda" offers a structure of sequences where a line of jumping keys gallops in the harmonies of another more fragile line. The synths bathe the atmospheres of a heavenly approach which is very near the fragrances of Tangerine Dream. In fact, the rhythm moves with good percussions and with beautiful harmonies which make relive the vibe of the Canyon Dreams. It's beautiful synth-pop, as much delicate and cheerful as "Destination Terra".

"Fireflies in the Starlight" brings the clock to rhythm with a heavy mid-tempo which oscillates on good sequences, as lively as those bongo drum percussions, which thunder to the ton and with solid riffs of an e-guitar which remind the Miramar ambiences, always from TD. And like on every track of “Quantum Earth”, the music dives into a more dreamy, a more ethereal passage, before taking back its shape with subtle modifications in its structure.

The introduction of "Infinite Improbabilities" makes us revisit the dreamy moods of Flashpoint with a line of bass sequences of which the oscillations crawl under the charms of a synth to the singings flavored by the flutes of desert. A carpet of prisms covers this sneaky rhythm whereas the singings take on a dress of spectres. The ambiences are on the edge of the works from the psychotronic era with organic pulsations and threatening synth pads which depict the evolutionary rhythms of the Dream, periods Wavelength and Near Dark. Moreover it's about this album that I'm thinking when the percussions approach the moods with strong disordered strikes, turning upside down a passive rhythm which gesticulates like a poisoned skeleton before becoming as steady as the good passages of Near Dark. By far, the most fascinating track on “Quantum Earth” which at the end is a solid album of electronic rock to the trends always so futuristic.